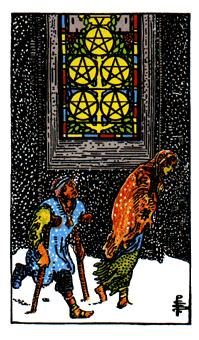 Consider carefully what consequences may result from joining forces.

This suit, most often named "Coins" or "Pentacles", is a symbol for a magical talisman that represented wealth or potential. This suit represents something supportive that is available to you -- whether it be health, some kind of talent, a material or financial resource.

The Five of this suit is the card of desire and gratification, expressed in classical tradition as flattery and false promises. This card represents both the seducer and the one seduced. There is undeniable excitement in the attraction of opposites; we have all had delightful moments of magnetism with a stranger. However, if promises are only spoken to achieve short-term gratification with no intent of follow-through, or the attraction appears as competition to more fulfilling relationships, the long-term result won't be worth the thrill of the chase.

The appearance of a viable relationship does not always bear out, so don't put anything of real value at risk over an infatuation. Since the suit here is Coins, this is as likely to be related to business as to pleasure. Try to remove the influence of glamour from your thinking.

Note: In the English decks, like the Rider-Waite, the sickly poor freezing outside a well lit church warn of the painful outcomes of bad choices, rather than focusing on the dynamic tension of the choosing itself.

The Five of Coins in this position advises you to create contractual agreements with those around you who have similar interests. In this kind of situation, there is strength in numbers. Put your heads together and devise a bold plan for future objectives and decide how to invest in their success. This Five of Coins recommends teamwork and the mutual benefits a combined effort can yield.

Note: In the English decks, like the Rider-Waite, the sickly poor freezing outside a well-lit church warn of the painful outcomes of bad choices, rather than focusing on the dynamic tension of the choosing itself.