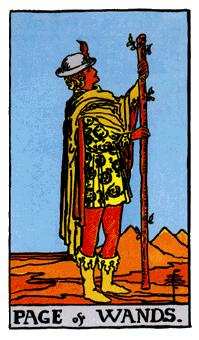 You are an agent of innovation and change.

This card is traditionally entitled the Page, but in some modern decks appears as a Princess. This archetype is that of a unique individual, a nonconformist, often something of a bohemian, definitely independent by nature. He or she requires little in the way of affirmation or approval. Perhaps a mischief-maker, often an innovator or inventor, the energy represented by this card will only serve others until he or she figures out how to get others to serve him/her.

This person's freedom is so important they would rather go as a peasant among strangers than inherit a fortune with strings attached. Don't be fooled by this humble appearance. This person is a future captain of industry or world leader, now serving an apprenticeship. These people are sometimes seen planting a staff like a flagpole into the earth in the far off wilderness (where they can start fresh without having to make any compromises). You could think of this card as a wild card.

Quietly gather information that will help you direct a situation to unity.

This card is traditionally entitled a Page, but in some modern decks as a Princess. In this position, this card suggests that you cannot know how to facilitate communication until you have studied your environment. Your task may be to blend into your surroundings so you can gather information and get a clear sense of what is going on around you.

Think of yourself as a secret agent for the greater good. In due time, others may recognize the role you play in the transformation from divisiveness to unity. However, right now you are being asked to watch quietly from the sidelines.