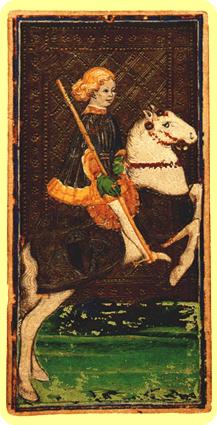 A new journey of discovery is about to be embarked upon.

This character is traditionally called the Knight, but in some modern decks appears as the Prince. Traditionally, this card indicates the energy of an instigator, a fire-starter, a feisty and easily provoked character who is liable to attack first and ask questions later. This energy is quick to anger and enjoys a fight -- so much so that the thought of a diplomatic solution can provoke a secret disappointment! Nevertheless, he sees himself as trying to help, rescuing the world from its madness by imposing his sense of order upon it.

His vices are bossiness, paranoia and a tendency towards overkill. Nevertheless, there are times when his energy is perfectly appropriate, like when his assertively protective nature is defending threatened treasures or interfering with dark forces. The trick is to keep a sense of proportion when this Knight unleashes his fire, because he enjoys intense experiences and is always ready to take it to the next level. Once in awhile, this kind of intensity is called for, but on a daily basis it is exhausting.

Focused action must be taken; appropriate resources are available to draw upon, and the time is ripe.

The Knight of Wands (in some decks, a Prince) in this position advises that you modify your self-image in order to get a sense of yourself as a person of action. No matter what your past patterns have been, it is fully possible to place yourself solidly on the road toward the future.

Not only can you get a clear sense of the proper path, but you will also have enough instructions to be self-directing. Necessary skills and resources are available to you, and the time is right for you to act. Once you get started, you may be surprised how easy it can feel, but don't be seduced by that feeling. There will be comfortable stretches of the road and there will be distinctly uncomfortable ones. Know that any form of motion is better than no motion.